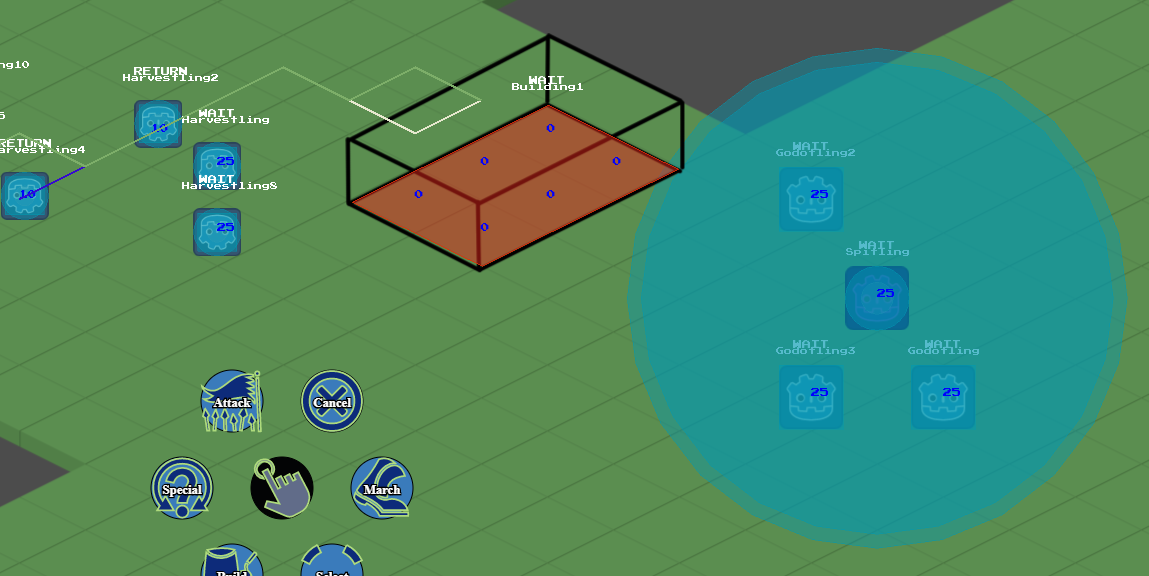 I listened to so much of the Starcraft 1 Terran sound track that month... It didn't help me get to anything close to a completed game, but its kinda impressive I didn't get sick of that music at all.

After 2 months of 2D platformers I decided to branch out genres and what better 'next' genre than a real time strategy game. Answer, literally any other genre. The original concept was too figure out a good way to port a Starcraft 1 style isometric RTS to touch controls and gacha elements. This is already a tall order, but I conceptualized 'The Button' which I'm proud to say actually did all it was meant to and very nicely. Godots UI system is just that flexible and powerful, and The Button saves enough screen real estate to make what I wanted possible. I just didn't get that far.

The fact this tech-demo (I can't call it a full game) works as well as it does is pretty impressive, given most of time was spent reading papers on path finding theory. I never really got pathfinding working in a good manner, not fully, and the code is VERY hacky generally depending on temporarily phasing through allies to get the units where they need to go. Formations are iffy too, though I'm kinda proud of it.

A large problem was actually not understanding how to do Astar right. If I did it now I think it would be a much easier process as I understand what the algorthm is expecting of me better.

Another inexplicable decision was to not port over the Boundless state machine to my 'Godotlings'. Frankly debugging this was hard, and alot of the issue was all the code being in 1 mega class rather than split up in coherent chunks. At this point I don't understand what I was thinking then, but it was a clear mistake. Take the time to port the state machine over, or build a new one based on that one, would have saved alot of time in the long run.

Pretty much the whole month was spent trying to make these things behave when moving. I learned an amazing amount, and would suggest people try the RTS route for a project themselves, but maybe AFTER doing other path finding related games first. Path finding 1 unit is pretty simple. Path finding a mob is amazingly more complex, and you really want those basics down first.